Within our SSAs we had set up four activity days which we will write about now. The first two were culture bus days for the neighborhood in North-Tallinn, our pilot area – Kopli. Targeted mostly to children and their parents plus the elderly. The third pilot activity was a collecting recipes and joint cooking/tasting event, and last but not least we had a cherry on top with students from two schools, who prepared and painted a wall using stencil-technique, to a public wall in North-Tallinn.

All added photos are taken by Siim Loog.

Culture for all
The culture bus pop-up days took place one week apart and we used different locations for them as well.
On the first day, taking place in the garden of and old culture center, we focused mainly on children and families. In cooperation with Tallinn Central Library, we had setup a tent for kids to draw, do some handicraft work and read them various books. There was a mobile library (aka library on wheels) present as well, for all the guests to borrow books and take part in the book fair. Youth Center was present to play boardgames. An analogue set up took place one week after that, but we moved the party from old culture centre to the garden of an old rubber factory, which now hosts multiple cultural events very often. This time, the target group was mainly on senior citizens living nearby, but also children with their parents. We hosted a slight yoga-exercise session for the elderly and after that had a conversation corner with them about the cultural activities and their needs taking place in Kopli. The day was ended by a book presentation of the well-known author Jekaterina Skulskaja.

A tasty community meeting
As we had already gathered experiences organizing our SSAs, we moved forward with our next event – collecting recipes from Kopli district and staged the open-air kitchen to do a cooking event of well-known tastes. Collected recipes are from a wide range of use – from more every day and occasional recipes, to the ones for party tables, some fancier, some more traditional, etc. We managed to gather over 70 recipes. Whereas the youngest chef was from 12 years old and shared his recipe for a beet-root soup and the oldest one, 82 years old, shared her favorite grilled-chicken salad. All the guests were welcomed by the chef of the day who had already prepared three traditional appetizers. The open-air kitchen event was very warmly welcomed by the community, brought sparkles in the eyes of the guests, and got a lot of good feedback. With the help of a nearby museum, we will hopefully host an exhibition to present all the shared recipes in 2022.

Our cherry-on-top event was a huge street art project that was led by professional stencil artist Von Bomb and involved 20 youngsters from two local schools. At first, they started the planning and preparation process, during which students selected and set up the elements and composition of the work. For the composition of four figures, the participants chose models amongst themselves, and based on the photos taken from them, they jointly prepared stencils for the work to be placed onto the wall in their community. We managed to get an agreement from a local citizen to use their private property wall and the sketch was confirmed with our city’s art curator. All the involved parties agreed that street art carries the ambition to enrich urban space. 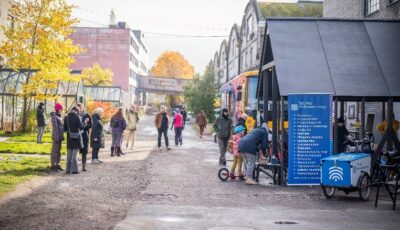 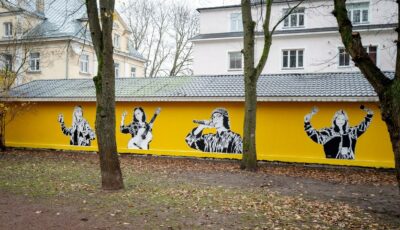